Continued from last week, my essay on “Venture and Social Capital”:

3. Break through the glass ceiling
In a future in which business will he under extreme pressure to eliminate waste and increase efficiency, it’s hard to see how Japan can continue to underutilize half its population: women. The higher ranks of corporate Japan, in particular, are astonishingly absent of women.
According to the 2009 report Corporate Women Directors International (CWDI), women accounted for only 17 of roughly 1,200 seats on the boards of Japan’s 100 biggest companies – roughly 1.4 percent. Japan even lagged behind Arab countries such as Oman, Jordan and Kuwait. Some of the most truly international Japanese firms were the worst offenders. Toyota, Nissan, Honda, Panasonic and Toshiba do not have a single woman director.

Japan’s top universities turn out large numbers of exceptionally bright, talented women who then cannot find suitable employment in Japanese companies. In a phenomenon known as “gender arbitrage,” Western firms are hiring these overachieving women, giving them responsible positions and good salaries. It is Japanese companies that are missing out on this talent pool.

The biggest problem Japanese firms have in promoting women to directorships is that there are so few women managers to promote. Even companies whose customers are all women are generally run by men. In other words, a bias in hiring and a quite low glass ceiling after entering a Japanese company create a self-perpetuating situation.

Looked at from any perspective, getting more women into work is the only economically rational choice for Japan. The population is both aging and shrinking; there is substantial resistance to increasing immigration; and the economy desperately needs ways to revitalize growth.

A recent study by Goldman Sachs examined this assertion and concluded that if the rate of female participation in the labor force rate could be raised to that of men (almost 80 percent), it would create over 8 million jobs and add as much as 15% to GDP. Because Japan is the only advanced industrialized nation with such a huge, skilled, untapped resource, it has a golden opportunity to accelerate growth quickly and sustainably.

Conclusion
Changing Japan in these three areas—studying abroad, cultivating volunteerism, and promoting women–would be catalytic for society as a whole. One important area that could benefit is venture capital.

While it is true that Japanese corporations and financial institutions make micro-investments in venture companies, an American-style venture capital industry does not exist. It’s harsh but not entirely unfair that the VC community in Japan is derided as “Very Conservative” or even “Very Cowardly.” There have been many attempts, especially at the Ministry of Economy, Trade and Industry (METI), to kick-start the entrepreneurial process. Several programs give loosely defined grants of between $100,000 and $1 million to exceptional researchers and projects in universities or research labs. Unfortunately, many researchers use this money simply to fund more research, not to build businesses. In the past few years, these investments have returned less than 1% on average, compared to 3.9% for private venture capital, according to a 2009 Japan Venture Research report.

There are also government-backed VC companies that were created to invest both private and public money into entrepreneurial ventures. Unfortunately, they lack the kind of real-world experience that is essential to understanding the challenges facing venture companies. While the ideals underlying these and similar government programs are noble, they have ended up becoming a moral hazard to Japanese entrepreneurs. Simply put, governments are not good at picking winners, nor should they be trying to do so.

In the U.S, the principals of venture capital companies are usually former entrepreneurs themselves, so they understand the problems intimately. American VCs also expect to take an active role in their investees, not merely injecting cash but also hands-on management skills, personal contacts, and more. For every dollar in cash a VC invests, he also invests a dollar of knowhow.

In Japan, venture capitalists typically take only observer seats on a company’s board without voting rights. The ostensible purpose is to protect the VC firm from liability and criticism. The VC provides only small levels of capital and no management advice. This inactive, risk-phobic approach will never support a healthy venture economy.

To be successful, a venture capitalist must understand entrepreneurs’ needs and truly want to help them succeed and must also understand the dynamics of the marketplace. Obviously, this echoes the three priorities I have identified for the Japanese economy.

Like the economy as a whole, the VC industry needs well-educated, insightful, analytical people – male or female. It needs creative problem solvers imbued with a broad, global perspective. And it needs people with the ability to understand multiple perspectives and a genuine desire to help other people to become successful – an empathy that can be sparked through volunteerism at an early age.

I firmly believe that if Japan could harness only a fraction of the power in its disenfranchised female working class and foster a new generation with a broader global outlook and a willingness to help others, it would not only revitalize its economy, but become once again a model for other nations to emulate.

(End of part 3 of 3 – Your comments are always welcome) 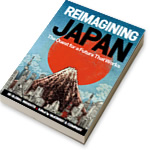